I’ve spent the last couple of weekends in Weardale and Teesdale. Known as the Durham Dales, they have their own characters despite sharing the same central fells. I wanted to get some walking and photography done, and maybe capture their differences on film, but our confused British weather had other ideas.

Every outdoors photographer will know that hot hazy days and dull gloomy ones are equally rubbish for taking photos – the light just isn’t on your side. So I was pleased with the forecast for my Weardale trip – dry with sunny intervals, meaning plenty of light and interesting clouds.

I took the bus up to Frosterley. I was going to go all the way to Stanhope but realised just in time that I had the wrong map. Weardale is right on the top edge of Explorer OL31 (Teesdale and Weardale), but the north side of Stanhope is on OL43 (Consett), which was at home. No problem – I like Frosterley.

The day started off bright and sunny, but the clouds were building on the tops. I headed up the south side of the dale, with a vague plan to find a circular route on Pikeston Fell. My side was bright with weak sunlight, but the north side was in deep shade – the hill was black. This is the kind of weather I hope for on a photography walk – interesting.

while my side of the Dale was bathed in light, the other side was in deep black shade 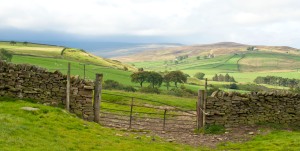 The sunlight and clouds make for very interesting scenes to photograph

Of course there is a flip side. By the time I got to the open access land on the top it had started raining. I watched a beautiful low rainbow over Frosterley village for about twenty minutes. Unfortunately it was still raining where I was, so I kept my camera safely tucked up in its waterproof bag.

The top of Pikeston Fell is bleak. The view is of bare yellow tracks and a bronze-and-black network of managed heather squares – this is a grouse moor. I had a choice of following ugly new tracks or the invisible calf-deep-in-heather right of way (I really can’t call it a footpath – there is no path to follow). Fine drizzle meant that the yellow track and silhouetted grouse butts were all that could be seen in the gloom. Occasionally crushed shards of galena – lead ore – glittered on the track. This is old lead mining country, and the sandstone used for the track is as local as you can get.

Someone's turned out the lights. I think there's a good view from here!

The track I was on took me down to a valley nestled between Pikeston Fell and Hamsterley Common. On a good day you can see the edge of Hamsterley forest and there is a small but beautiful wood at the Meeting of the Grains, where the North and South Grain becks converge. A very pretty picnic spot, and far enough from the road to keep those pesky leisure walkers away. A buzzard circled overhead – a surprisingly rare sight in the Pennines considering the abundance of rabbit carcasses. Visibility was terrible.

I now had a choice – turn round and head back along the boring track, or find the clearly-marked-on-the-map footpath. I had plenty of time, so took the footpath option.

An hour later and neck deep in bracken, I’d barely made the first mile and was starting to wonder if I was going to make the bus back. The path was intermittent and inaccurate, as all paths walked mainly by sheep are. After the tricky first mile, there was nothing for it but to take a compass bearing, brave the heather and head uphill and north.

Once I got to the top, and in sight of the footpath back to the village, of course the sun came out. But I couldn’t dawdle, I had a bus to catch. 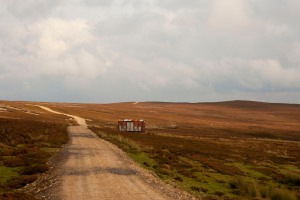 Now it's time to leave the fell top, of course the sun comes out

The weather turned a bit weird the following week, as if the weather god woke up late and remembered he’d forgotten to turn the ‘summer’ switch on. It was really hot. In a surprise move, my Taller Half suggested an October camping trip. We settled on Doe Park in Cotherstone, Teesdale.

The forecast changed as soon as we made the booking with the campsite. Saturday was still going to be ridiculously hot (not that I’m complaining, you understand) while heavy rain was forecast for overnight and sunday.

Cotherstone is a lovely dales village halfway between Barnard Castle and Middleton-in-Teesdale. The three mile walk along the Teesdale Way from Barney to Doe Park felt like ten, it was so hot. Stopping for photos was out of the question – too much effort and the light was too bright. Never mind, we got to play with my new wood burning stove sitting by the river – but more about that in my next post.

It rained overnight but the walk back was mostly in warm drizzle. We didn’t get the forecast heavy rain, but again not a photo day. I managed to get a couple of misty-morning shots and that was it. Not a walking day either, as it was far too hot for walking far in waterproofs. At least this gave us plenty of time for a slow lunch at Penny’s cafe in Barnard Castle.

Now the weather is back to normal. Cold, windy, old fashioned autumn weather. Tonight the wind is bitter, and I believe snow is predicted for the end of the month. What a contrast.

After working with horses for many years I came to my senses and got a 'proper job'. I now live in Weardale with My Taller Half, a mad border collie and 5 chickens. Still wishing I could spend all my time in the great outdoors
View all posts by Yasmine →
This entry was posted in Out and about and tagged clouds, Cotherstone, Durham Dales, Frosterley, photography, Pikeston Fell, Stanhope, Teesdale, Teesdale Way, walking, Weardale, weather. Bookmark the permalink.